HARRIET AND FAMILY RETURN TO CENTER PARCS IN 2017 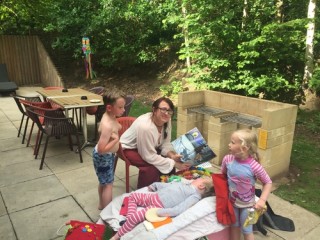 It had been almost 2 years since we had been on holiday as a family, due to Harriet`s overall condition deteriorating and simply not having the funds in place, when we were able to take a short break.

The school strikes had put a lot of pressure on Harriet, Lesley and myself during late 2016, through to early 2017 and it felt as though the family was falling apart from all the stress we had been put through.

I felt it was important to try and move on from our bad experiences, which meant trying to focus on the more positive things in our life, we had been through a lot, but we were still together, Harriet was back at school and our lives were starting to get back to normal.

Harriet and the family really needed a change of scenery, we needed to get away from the house and all the problems that we had associated with it and therefore I felt it was important to try and return to Center Parcs, as this was a place Harriet felt calm and relaxed, as did the rest of the family.

We had been to Center Parcs Sherwood Forest in Nottingham on three separate occasions since Harriet was born and found that the atmosphere was extremely calming for not only Harriet, but the rest of the family.

I had looked at taking Harriet to other holiday destinations, but we were extremely limited due to Harriet`s complex Life Limiting Condition. She was not able to travel for long distances and needed to be in an environment that catered for her medical needs. I found it almost impossible to find any holiday destination that had an electric bed, which was paramount to Harriet`s wellbeing.

There were other criteria’s that we had to take into account, which were the destination distance, medical services nearby and a hospital that knew Harriet well. Center Parcs in Nottingham was perfect, it met all of the criteria that we needed to keep her safe and was a place we felt that Harriet was happy and content.

I managed to get some funding from a couple of charities towards the break and was now in a position to put down a deposit on an adapted lodge, which catered for disabled people. I paid the outstanding balance a month before we were due to go and was now looking forward to a few days away with Harriet and the family.

Harriet continued to struggle with her asthma and have severe respiratory problems over the course of the next few weeks, which in turn caused us a lot of concern as to whether she would be well enough to go return to Center Parcs.

It was now five days until we were due to set off for the break, when Harriet ran into problems, she became unresponsive and started to desaturate, Harriet was now having a severe seizure. Lesley administered the Bucolam Midazolam that we had been given, to help Harriet in the event of a seizure, but this did not seem to help.

We had to call for an ambulance and within five minutes the paramedics arrived, Harriet was assessed by the crew and they were extremely concerned that they did not have the equipment to control the situation and wanted to take Harriet to hospital. Harriet was rushed by Blue light to the Royal Derby Hospital, where she was taken into the resuscitation room, the doctors, anaesthetists and nurses managed to get her stable and she was able to return home that night.

Over the course of the next few days Harriet started to return to her normal self and we now felt a little more comfortable taking her to Center Parcs.

Friday 9th June 2017 – we set off on our short break and arrived at Center Parcs just after 2.30pm, we were directed to our adapted lodge which was located in pine and were now looking forward to a few days in the forest. The weather was quite nice and after putting all our things away, we were able to take Harriet and the children for a walk through the forest.

After the walk we returned to the lodge where Harriet was able to relax on her wedge outside near the trees and watch the little animals walk past. 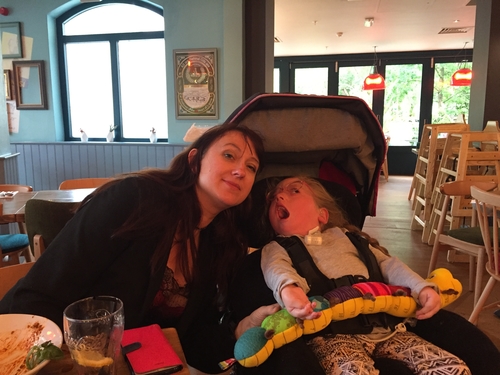 Saturday 10th June 2017 – today my daughter Evelyn was 14 and although she was a moody teenager, we wanted to do something as a family and therefore I booked a meal at the Bella Italia restaurant in the Center Parcs village, with the help of guest services. We arrived just before 3pm and were met by the restaurant manager and a lady waitress, they had set up a table with birthday balloons and a banner and made us feel extremely welcome. Harriet was calm and coped very well in the restaurant which played soothing Italian music, which is something she was quite fond of.

The children went to different events during the day and returned to the lodge with us later in the evening.

Harriet looked happy, she seemed to have a sparkle in her eyes and was very alert as we pushed her through the Park Forest.

Sunday 11th June 2017 – Harriet had been awake during the night with breathing difficulties and we were concerned that she would not be well enough to go out today. We thought it was best to let Harriet rest during the morning and let our other children continue with some of the center parcs activities, while we waited to see how Harriet was when she woke up.

Just before 11.00 am Harriet woke up and looked calm and happy, her work of breathing had seemed to sort itself out after the nebulizer, she had been given and we were now bale to go out.

We spent the rest of the day walking with Harriet to different parts of the center parcs and then returning to the lodge, when Harriet needed to rest or required medication. 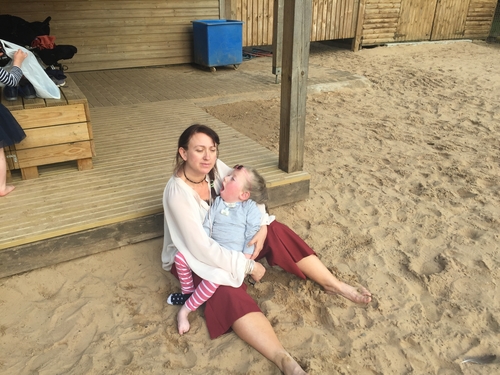 I would like to say a Big Thank You to the two charities that helped fund the break for Harriet and the family to return to Center Parcs this year, which were the Alan Bott Centre and Family Holiday Association .