HARRIET IS ASSESSED FOR A COUGH ASSIST MACHINE 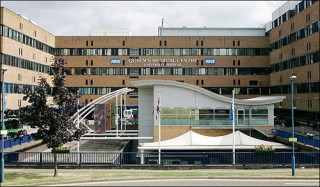 HARRIET IS ASSESSED FOR A COUGH ASSIST MACHINE

The colder months had given Harriet a rough time, her asthma was getting worse and we were concerned that her health was deteriorating due to her undiagnosed Life Limiting Condition.

November 2016 – It was just over 2 weeks since Harriet had her flu jab when we noticed a drastic change in her breathing pattern, she had been working hard to maintain her saturation levels and looked very unwell.  We called for an ambulance and Harriet was admitted to the Dolphin high dependency until at the Derby Royal Hospital.

Harriet had to stay in hospital for 4 days while the consultants looked to correct her work of breathing and respiratory problems with Magnesium infusions and nebulizers.

Harriet was released from hospital but her condition stayed the same for another 2 weeks, she needed regular oxygen, nebulizers and round the clock care to keep her safe and avoid her being readmitted to hospital.

December 2016 – It was the first week in December and we had to take Harriet back to the Derby Royal Hospital, to see her Paediatric consultant Dr Richard Bowker. He had seen Harriet when she had been admitted in November and wanted to do a full medical review and see how she was getting on.

Dr. Bowker went through all Harriet`s medication to make sure everything was up to date and that we were prepared for the winter months. He then examined Harriet, before listening to her chest. He noted that there was a significant wheeze, that he was concerned about and wanted us to go and see a consultant at the Queens Medical Centre in Nottingham to talk about the possibility of a cough assist machine.

March 1st 2017 – We arrived at the Queens Medical Centre in Nottingham just before 10.00a.m, to see respiratory consultant Dr Thomas. There was simply nowhere to park as usual and therefore I had to park the van in one of the consultant’s spaces, as we could not push Harriet out in the cold weather, as this could trigger a life threatening asthma attack.

We took Harriet through to the respiratory clinic, where she was weighed and had her paperwork assigned to the consultant.

It was a ten minute wait before we finally went through to meet Dr. Thomas, he introduced himself, one of the nurses and one of his students. He told us that Professor Harish Vyas had retired a few days ago and that he was now Harriet`s new respiratory consultant.

I felt a little sad when I heard this if I was honest, Professor Vyas was one of the key people that had helped look after Harriet and had kept her alive and had given us the tools to look after her when she was at her worst.

Dr. Thomas had already been through Harriet`s large hospital files and had some knowledge of her, when she had been on the paediatric Intensive Care, in the past. He went through all her medications with us and wanted to try and build up a picture as to what was working and the things that were not.

We told him that we were concerned that Harriet`s condition had deteriorated significantly since November and that this wheeze would just not go away.

Dr. Thomas agreed that the wheeze was very prominent and that Harriet`s work of breathing was a little harder than he would of liked and asked if he could examine her. He listened to the front of Harriet`s chest for a long period of time, before listening to her back. He told us that there was no real sign of the wheeze lower down in her chest and that he thought most of the problems were from the upper chest areas.

We asked Dr.Thomas about this and what he thought we needed to do to try and help Harriet.

Dr.Thomas told us that he wanted to try a few different things, including a Humidification system during the night and a cough assist machine.

I told Dr.Thomas that we had wanted to try a Humidification system for a few years, as Harriet had always responded well to this in hospital, but we had never been given the equipment to try at home.

Dr. Thomas told us he would talk to his team and look to get this introduced to Harriet`s respiratory plan a soon as possible. He then went on to talk about a Cough Assist Machine and why he thought this would be beneficial to Harriet.

He told us - The Cough Assist Machine helps to clear secretions from the lungs by helping you with your breathing. When you breathe in (inspiration), the machine gives you air (positive pressure) to help expand your lungs. When you blow out (expiration), the machine creates a sucking force (negative pressure) that pulls the air out of your lungs. This rapid change in pressure during the different phases of breathing (inspiration and expiration) helps make your cough stronger and more effective.

My wife and I had not really done a lot of research on a cough machine, as we did not particulary think this was something that Harriet needed and were a little surprised when the consultant told us this is something he needed to look at with his team.

Dr Thomas seemed to really know his stuff and wanted to give us new options for the problems Harriet was experiencing on a daily basis.

The meeting ended on quite a positive note, Dr.Thomas had a plan he wanted to implement to help give Harriet a better quality of life and told us he would be in touch as soon as he had discussed this further with the rest of his team.