Harriet returns to the QMC to see the Respiratory professor 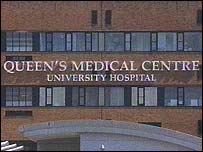 Harriet had been extremely poorly over the last few months, no sooner had she got over one cold or virus, would she then come down with something else that would have a devastating effect on her respiratory system.

The consultants at the Derby Royal Hospital were unable to explain why Harriet was experiencing so many episodes of respiratory distress and could only manage the problem, rather than treat the cause.

We needed a respiratory specialist and decided to contact professor Vyas, at the Queen`s Medical centre in Nottingham. After speaking with professor Vyas, he said that he would be happy to see Harriet, but we would need to get a referral from Harriet`s GP.

The referral was sent the hospital and we were fortunate enough to get an appointment to see professor Vyas the following week.

We arrived at the Queen`s Medical Centre in Nottingham with Harriet on Thursday and went straight up to E Floor, to see Professor Vyas. Within a few short minutes, we were called into the room with Harriet and sat down while Harriet`s the notes were read.

Professor Vyas had not seen Harriet since her admission to the Paediatric intensive care unit, after her spinal operation in October 2010 and had to bring himself up to speed on what Harriet was like now.

Professor Vyas asked us how Harriet was and what had changed in Harriet, over the course of the last few months.

We explained that Harriet had been experiencing episodes of respiratory distress that would come on within a very short period of time and had been admitted to hospital on most of these occasions.

Professor Vyas then listened to Harriet`s chest and noticed there was a wheezing sound, which would normally be associated with asthma, but would need to test this theory with a salbutamol nebulizer.

We told professor Vyas that Harriet had already been prescribed a salbutamol medicine, to help with her breathing and the wheezing noise, but this only relieved the breathing problems for short periods of time.

Professor Vyas then gave Harriet a salbutamol nebulizer and then listened to her chest, he was pleased that the salbutamol had cleared Harriet`s chest and wanted to try Harriet on a steroid inhaler.

Professor Vyas explained that Harriet was now suffering from Asthma and although the salbutamol had relieved the wheezing sound from Harriet`s chest, this would only be for short periods of time. Harriet therefore needed an asthmatic inhaler medication that could be pumped straight into her Tracheostomy, when Harriet started to wheeze or was in discomfort.

Harriet was prescribed a steroid inhaler called Fluctiasone Propionate and we were given a special attachment that acted as a chamber for the Trachesostomy. The prophylactic dose of antibiotics, we were giving Harriet three times a week was also increased, to help prevent any further colds or viruses.

Professor Vyas wanted to see Harriet in 6-8 weeks time, for a further assessment on the new medication and told us we would be sent an appointment nearer the time.

As we left with Harriet to go home, it was a relief that we now had something to help treat Harriet`s chest problem, but at the same time knew Harriet now had another problem.

Eze Fitness Raises Funds for Harriet
Harriet is rushed to Hospital in the early hours o...