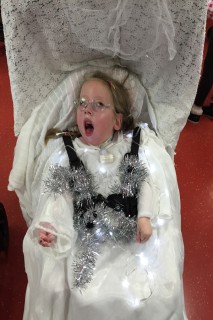 It has been just over 2 years since Harriet started Ivy House School in Little over, which caters for children with special or exceptional needs like Harriet.

Harriet spent alot of time off school in her first year, as she struggled to adapt to the school environment, she would get very stressed and anxious at times and thought life at school  would simply be too much for her.

Harriet had made some good progress in her second year at school, she had adapted to being in an environment with other children with special needs and seemed to have made a good relationship, with her teachers and carers.

In July 2014 Harriet contracted Chickenpox and was admitted to the children`s intensive care unit at the Queens Medical Center in Nottingham, which meant she was off school all through July. August was no better, Harriet`s spinal rod came through her spine and she needed emergency spinal surgery, which caused her alot of problems, which lasted a few months.

Harriet returned to Ivy House School in the middle of September, it took her nearly a month to get back to where she was before the Chickenpox and Spinal surgery, but it was nice to see that she still wanted to be at school.

The teacher had been telling us that she wanted Harriet to be in the School`s Christmas Nativity, but I was very apprehensive about Harriet being in a room with lots of other children and did not want her to struggle or get upset. I was reassured by Harriet`s teacher that they would take Harriet out of the hall, should Harriet become upset.

Today was the big day - Harriet was going to be in the schools Christmas Nativity, Lesley and I were not sure what she would be doing, but were pleased she was well enough to be at school.

We sat down with alot of the other parents and some of the older children from the school, there were quite a few people in the room, but it was not cramped or claustrophobic, given the hall was quite large.

The school head mistress welcomed everyone and then explained to us that the teachers would be telling the story, while the children came into the room.

A large screen came on at the front of the Hall with some of the children from the school, it showed them trying to do Christmas things, that were linked to the schools nativity - Lesley became very emotional and started to cry.

The first teacher started the nativity with a short story and then started to sing with the other teachers and members of the audience as the first children came into the room with their carers. The children were not able to speak or sing, but seemed to know where they were and why they were there.

One by one the teachers told their stories, sang their songs and the children came into the room, all of which represented some part in the school`s  Christmas Nativity.

As Harriet was wheeled into the Hall in her wheel chair, dressed up as an Angel, it felt very emotional - she looked very alert and seemed to enjoy being part of the schools nativity. Harriet`s part was very similar to the children with special needs, she represented a symbolic part of the schools Christmas nativity, with the teachers acting as the child's voice.

After ten minutes it became a little too much for Harriet and therefore her carer took her out of the Hall to rest, as the nativity continued.

We continued to watch the Christmas nativity to the end and were very proud of Harriet and all the other children that had taken part in it.

I have been too many school Christmas nativities over the years, but none of them were as emotional as the one I watched today, it was truly a very humbling, sad and joyful experience, all rolled into one.

I would like to say a BIG THANKYOU! to Harriet`s teachers, carers and the Head Mistress for not only putting on a magnificent Christmas nativity, but also making Harriet feel part of something that can only be described as very special.