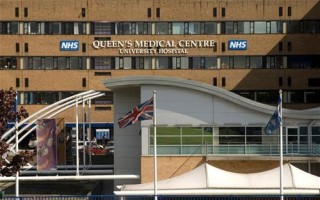 Last week was a busy week for Harriet and ourselves, we had to attend the Queens Medical Center in Nottingham, for a neurological review and a spinal review and had to give blood samples for the genetic tests.

Tuesday 3rd June 2014 - we arrived at the Queen's Medical Center in Nottingham just before 11.00a.m, to see consultant neurologist Dr.William Whitehouse. The nurse on the desk told us that we had the wrong date and that Harriet was not to be seen until the following week.

After showing the nurse our letter of confirmation, she had to contact Dr.Whitehouse and explain to him, that there had been some confusion surrounding our letter and that we had not received a further letter, changing the date.

Dr. Whitehouse agreed to take time out from his busy daily schedule to see Harriet and within half an hour we were in his office.

Harriet struggles with the hospital environment and becomes anxious and very withdrawn, so it was no surprise to us when she went to sleep, as soon as we walked into the office.

Dr. Whitehouse was pleased to us and remarked on how well Harriet had grown over the course of the last year.

He then started asking us about the seizures and whether the new seizure medication KEPPRA, had made any significant difference to Harriet.

We told Dr.Whitehouse, that Harriet was doing well on the Keppra seizure medication and that it had not only controlled the seizures, but also seemed to make Harriet more alert.

Dr.Whitehouse indicated that this was a good sign, but told us that Harriet was on the largest dose of Keppra for her age and that if she was to have any further seizures, then he may have to combine other seizure medications.

He then pulled up the latest MRI scan of Harriet's brain, he told us that the matter surrounding the brain was slowly increasing with Harriet's age and that there was no significant deterioration in the brain . He then went on to say that Harriet still has allot of neurological problems, for which he has no answers, but we should see matter growing as a positive sign.

We both felt relieved to a point, but knew this was only the matter, not brain stem or the core of her brain that was slowly being repaired.

Dr.Whitehouse then methodically went through Harriet's medication and seemed happy with most of it, but asked why the Baclofen had been increased so significantly.

We told him that Dr. Richard Bowker from the Royal Derby Hospital had to increase Harriet's Baclofen medication, as she was struggling to sleep at night and seemed to be in pain.

Dr. Whitehouse then went to examine Harriet, he was immediately concerned with the level of stiffness or tone and told us that this needed to be addressed. He did not want to increase the Tizanadine, as this would have made Harriet too sleepy or drowsy and decided on a new medication called DANTROLENE.

We had not heard of this medication before, but were willing to give it a try, especially if it was going to give Harriet a better quality of life.

As we left the office, it seemed that we may have a new medication to help Harriet, but would not know whether it would help her for a few weeks.

Thursday 5th June 2014 - we returned to the Queen's Medical Center in Nottingham for the second time in a week, it was an appointment with Harriet's spinal surgeon, Dr.Michael Greviit.

We were both very concerned with Harriet's spinal rod and wanted to know if Harriet was going to be alright.

Harriet was first on the list, we took her into see Dr.Grevitt , he looked at Harriet and smiled and said she had grown into a long little girl that had put on some good weight since he had last seen her.

Dr.Grevitt then pulled up the spinal x-rays on his computer and said he was happy with how the spinal rods were keeping Harriet's spine in place and that everything seemed fine.

We told Dr.Greviit that Harriet's rod looked as though it was going to burst out of her spine, if she was moved in the hoist, lifted up or had any form of physiotherapy that involved the swiss ball.

Dr.Grevitt then went to examine Harriet's spine, he could see the rod poking out her spine and completely took onboard why we were so concerned. He told us that he did not want to perform any surgery on Harriet unless it was absolutely necessary, as she was an extremely vulnerable little girl, but if the rod did come through, then he would have no choice but to operate.

We told Dr.Grevitt that we try to support Harriet's spine when she is lifted with the hoist, but it can be extremely hard to do, especially when she is having a bath.

Dr.Grevitt told us that there was allot of tissue surrounding where the rod was pushing at the skin and that this was a good thing, as there was a cushion of tissue. He told us to be careful and to try and support Harriet's rod whenever she was exposed to a lift.

As we left Dr.Grevitt's office, we both felt extremely relieved that Harriet did not have to have to go for surgery.