Harriet Visits the Anaesthetist at the QMC 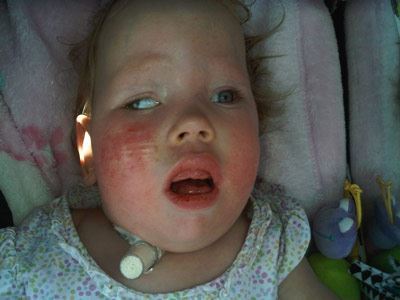 We arrived at the Queens Medical Centre in Nottingham with Harriet,  just before 2.30 in the afternoon, Harriet was tired and we were able to let her sleep while we waited for the lady at the desk to confirm Harriet`s appointment .

The lady behind the desk said that the consultant wanted Harriet to have an EEG scan and  would  see us after Harriet had been for the scan . A few minutes later we arrived at the room and Harriet was wired up to the EEG machine, the scan only lasted a few minutes and we were then told to head back to see the consultant aneasthestist .

A few minutes later we were back in the room and the nurse asked us if she could take Harriet`s weight, as the aneasthetist needed to work out how much aneasthetic would be required during the operation .

It was then back into the waiting room and we finally got to see Dr Suzanne Wake, who was Harriet`s consultant paediatric aneasthetist.

The meeting started well, Dr Wake talked about Harriet and what was involved during the operation and what to expect after the operation. Some of the information was quite graphic as the consultant explained how many tubes would go into Harriet`s veins, this made us both feel quite sorry for Harriet and once again we started to question why Harriet was actually having the operation, but we knew deep down that if she did not have it then her life would come to end within a very short space of time.

Dr Wake then examined Harriet and looked for possible veins that would be used during the operation to initially put Harriet to sleep.

At the end of the meeting we were asked whether we had any questions or concerns about Harriet`s operation.  I looked at the consultant and asked whether she thought Harriet would be ok and Dr Wake said that they would not be operating on Harriet unless there was a good chance the operation would be successful, but also highlighted that sometimes things do happen that are out of the control of even the best surgeons and consultants, but they always try and plan for the worst.

I shook Dr Wake`s hand and that of the scoliosis nurse, feeling more confident that Harriet would have a better chance of survival during the operation, but also knew that things could go wrong and the anxiety of being in the hospital with Harriet felt very overwhelming .

We took Harriet home and tried not to think about the operation.