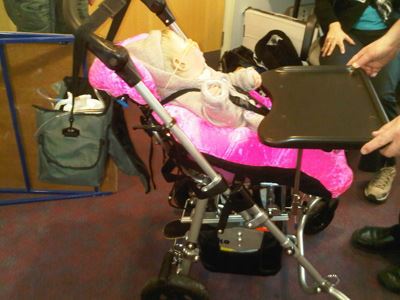 It seemed only a few short weeks since Harriet was placed in the mold for her new travel system, when received a letter to confirm an appointment date.

We arrived back at the Derby wheel chair services with Harriet and then went into the room where her new travel system was waiting for her.  The pushchair/travel system looked great, it was bright pink and had the support Harriet needed to keep the trunk of her body inline, but at the same time kept her Tracheostomy clear and allowed Harriet to breathe.

Harriet`s occupational therapist, Jan Nicholson was on hand to make sure that Harriet fitted into the new travel system, there were a few alterations made to the chair and then Harriet was placed into the pushchair travel system.

At first Harriet was very unsettled and required a lot of suction, but after a few minutes she became settled and looked comfortable .

The technician that supplied the travel system was also on hand to make sure that everything was safe for travel system to fit into the car and told us that it had been crash tested and therefore Harriet would be very safe. He then brought out a ramp and tested Harriet on an incline, to make sure that the pushchair did not tip over and it passed with flying colours .

All Harriet`s equipment was then bolted onto the new travel system and Harriet was ready to go. 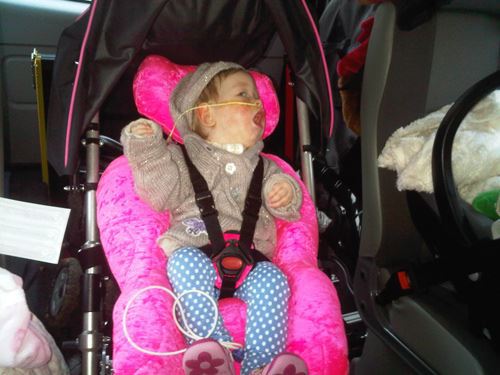 The new disabled vehicle we had purchased for Harriet, had been fitted with four special anchorage points with straps that allowed us to secure Harriet system to the vehicle, we had no idea how this went in and therefore asked one of the ladies from the wheel chair services if she would show us how to secure Harriet into the vehicle.

As we pushed Harriet up the ramp into the car it felt such a relief that not only was Harriet going to be traveling securely, but she would also be comfortable and therefore would hopefully require less suction while traveling.

Harriet was finally secured in the car and we slowly started to drive home, Harriet seemed a little scared at first, but settled down after a few minutes and looked as though she actually liked being in the car.

We arrived home and pulled down the vehicles large ramp, the straps that held Harriet in place were released and she was then wheeled down the ramp. 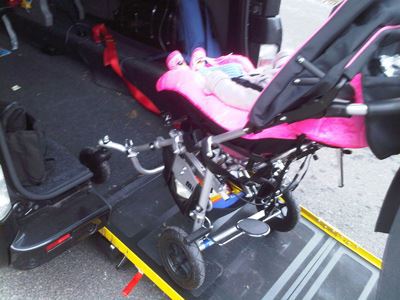 It feels so good to know that Harriet can finally travel safely and are now looking forward to some better weather that Harriet can cope with when she goes out to hospital appointments and visits the park.